A Day Trip to Stirling Castle with Rabbie’s

It’s been over a year since I joined a group of travel bloggers from around the world for the frenzy that is Hogmanay in Edinburgh, and I can’t believe I still haven’t told you about the adventure that came afterwards. One of the perks of this ‘Blogmanay’ trip was the opportunity to test my first ever Rabbie’s tour – a Scottish travel company I have since come to love and test on a frequent basis.

On an early January morning in the beginning of last year, I got aboard a Rabbie’s bus to join a day trip to Stirling Castle and Loch Lomond. If you only have a couple of days to explore Scotland beyond Edinburgh, spending a day in Glasgow and one out and about is a great way to see the many different faces of this place. Here is what to exptect from a day trip around the Lower Highlands with Rabbie’s and what I thought about my trip to Stirling.

This post contains affiliate links which I may make a commission from. Find out more here. Rabbie’s hosted me on this tour free of charge. All opinions are my own.

The Stirling Castle, Loch Lomond National Park & Whisky Day Tour, as it is officially described on the Rabbie’s website, does exactly what its name promises. You first drive from Glasgow to Stirling and have time to explore either the castle or the town. Your driver then takes you through the Loch Lomond and Trossachs National Park, with an optional stop at Doune Castle, if there is enough time. You stop for lunch in the heart of the national park, in the quaint town of Aberfoyle, before heading on to the eastern shore of Loch Lomond. The final stop of the day is the Glengoyne whisky distillery, where you can join a guided tour and tasting, before returning to Glasgow.

The bus leaves Glasgow early in the morning (9 am) and heads straight for Stirling, approximately 45 minutes along the motorway. The drive is easy to stomach – this is the smoothest section of road of the day.

The tour includes a leisurely break in Stirling where you can either explore the beautiful Castle (ticket not included, but available at a reduced price for tour guests), or enjoy a stroll around town. If you visit just one castle in Scotland, Stirling is a great choice – I even prefer it over Edinburgh Castle, for the exhibitions, the spectacular interior and the views into the distance.

If you’d rather save the pennies and explore Stirling, there is a lot to do here too! You can find some ideas in this post about Stirling; the only thing you won’t be able to see is the Wallace Monument, because it’s too far away from your drop off and pick up point at Stirling Castle.

A quick stop at Doune Castle

Back on the road the bus is now leaving the convenient motorway and drives east towards the Trossachs. On our way our driver briefly stopped at Doune Castle, just to give us an idea of how different the many castles of Scotland are.

Driving through the Trossachs (with photo stops)

This is where the road gets interesting – up and down, left and right; be thankful that you haven’t already had lunch. The scenery makes up for it though, even on a rainy day (like the one I went on). You drive through the valley and forests of the Trossachs, along Loch Venachar and Loch Achray, with fantastic views of the hills rising up behind them. One of the most beautiful features along the way, is the ascent and descent of Duke’s Pass, one of Lower Scotland’s most popular bicycle trails.

Once you’ve reached the bottom of Duke’s Pass, you enter Aberfoyle – a small village frequented by hikers and bicyclists alike – where you will stop for lunch. Depending on what day of the week it is there are several options serving various budgets.

Meateaters will find all delights at Aberfoyle Delicatessen, a deli and butcher’s shop that was sadly closed when I visited, while The Faerie Tree Inn serves up the usual suspects of pub grub – I can recommend their pie. The lunch break is rather short – just one hour – so there is not really enough time for a stroll through Aberfoyle afterwards. Don’t worry though, you have a wee walk ahead of you.

After another half hour drive or so the bus reaches Balmaha, a tiny village at the eastern shore of Loch Lomond. If the weather allows, you will get out for a little walk to a viewing point. It is not far, but slightly up hill and the trail leads through a birch forest. Make sure to wear appropriate foot wear! From up there you will enjoy a great view over the southern part of Loch Lomond, the largest fresh-water island in the British Isles.

The final stop of the day lies just a little south of the Loch and at the geographical edge between Highland and Lowland Scotland: the Glengoyne Distillery. If you haven’t already had a dram after lunch, this is where the ‘Whisky’ part of your day tour begins. The tour price does not include the ticket for the distillery tour, but is also available at a discounted price.

In the summer months you could go for a walk in the hills behind the distillery, but in winter you will most likely reach the distillery after dark, and there is no alternative activity after nightfall.

The tour is very interesting though and includes one to two whisky tasters. If you’re not convinced of the taste of Scottish single malts yet, like me, I highly recommend going for the ticket including two tasters – the second whisky is much maturer (18 years) and goes down like silk, while the standard 10-year-old whisky wasn’t really my thing.

With all three main features of the tour – the castle, the loch and the whisky – over and done with, there is nothing left to do other than driving back to Glasgow. The bus returns there around 6 pm, just in time to head out for a well-deserved dinner, or some more whisky in one of Glasgow’s many pubs – may I recommend Sloans?

Why should you book a day tour to Stirling and Loch Lomond?

I always enjoy going on tours with Rabbie’s, not just because the groups are small and the guides super engaged and fun; but also because the tours are flexible when it comes to adding extra-Scottish experiences. And so, on this particular day trip to Stirling Castle, we also stopped by an estate-turned-hotel on the shores of Loch Achray, to meet the resident highland coos of the hotel.

The day trip to Stirling Castle really could also just be called ‘Scotland in One Day’ because in those brief 9 hours we got to see just that. The hills of the highlands, dramatic castles, highland cows, views of serene and mysterious lochs, and the inside of a single malt whisky distillery. You could not ask for more!

Planning a trip to Scotland?

Read my top tips for planning a Scotland trip and check out my sample itineraries.

Let me help you plan an itinerary that is 100% YOU.

Or book a private walking tour in Glasgow with me!

GET HELP PLANNING YOUR TRIP 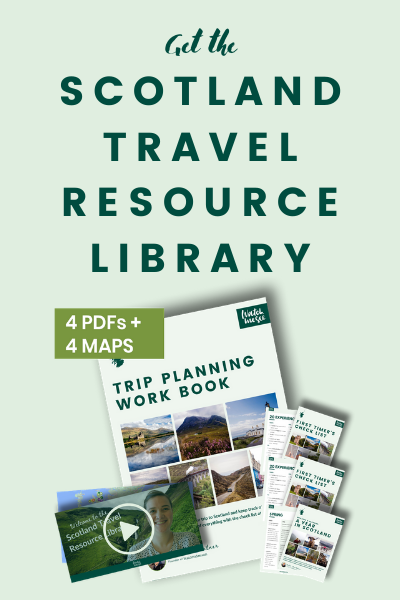 About Watch Me See

Hi, I’m Kathi! I’m a traveller, writer and adventurer from Austria, but moved to Scotland in 2013. I fell madly in love with my new home and started Watch Me See to convince all people to visit Scotland at least once!

On Watch Me See I share my top tips and travel stories from around Scotland. I also offer trip planning services to ensure that you have a great time here and an epic itinerary.

I hope you join me on my adventures!